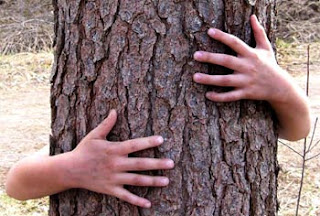 OK, so I'm a sucker for clever bumper stickers--on other people's car bumpers, not mine.   When Joy and I were over at Itasca State Park last Sunday afternoon I saw one that was new to me:  TREE-HUGGING DIRT WORSHIPPER.

"Nice to know there are still some unreformed hippies running around," I mused.   But then I pondered those four words more deeply...

"Dirt worshipper."   Pretty down-to-earth, one of my favorite ways of talking about God's way with us...incarnational to the core, wrapped in flesh, fully human (a word related to "humus," dirt) while fully divine.

Am I, in some sense, a "dirt worshipper?"

But "tree-hugging?"   I don't think so....unless...we're talking about that Tree, the one on which the Savior of the world hung.   The Tree to which we cling for life and freedom and a fresh start.

An appellation for only neo-pagan eco-freaks?

Or might that bumper sticker describe even souls like me, who worship the Word-made-human (humus), who hug for dear life the Tree of Life on which was wrought the salvation of the whole world.

Hmmm.  I wonder where I can get me one of those bumper stickers....
Posted by Larry Wohlrabe at 8:22 PM