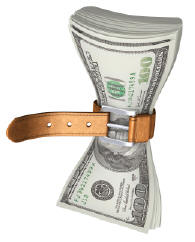 Get this state budget crisis fixed NOW.   Stop your preening and posturing and pontificating.

Stop describing "the government" as an entity outside of yourselves--for sure, stop describing government as an enemy.   Hey, Bucko, if you hold elective office in this state you are part of the government.   Heck, if you're a citizen (a "citizen" not a "taxpayer", by the way!) YOU ARE PART OF THE GOVERNMENT.

While you're at it, stop comparing the state budget to my household budget.   Cut that out.   Quit saying inane things like "Just as we have to tighten our belts in our families, so also state government (there you go again, speaking about the government as if it were an "other" and not a shared enterprise you are part of) must tighten its belt."   Sorry--that's not even close to being a valid analogy.   My little household, our little platoon, is small potatoes compared to the State of Minnesota....not just in terms of the dollars in our respective budgets, but also in terms of the scope and mission of our state's government.

What really isn't going to wash with me or other true-blue Minnesotans is tightening the belt of our state government around the necks of the poorest of the poor.   Don't even go there!

Read my lips:   politics is the art of compromise.   In Minnesota right now we have divided government--a Republican legislature and a Democratic governor.   We Minnesotans like it that way, apparently.   Compromise in this case means that the state budget will be balanced by a combination of spending cuts and tax increases.   Get on with it!

And one more thing:  our family is going to vacation on the North Shore in another week.   I expect all those gorgeous state parks to be open.    Don't disappoint me and my loved ones.

As my namesake the Cable Guy likes to say:  "Get 'er done!"

Your fellow citizen of Minnesota, a great state, worthy of our support, including our taxes....
Larry Wohlrabe
Posted by Larry Wohlrabe at 9:09 PM