Out of the Boat 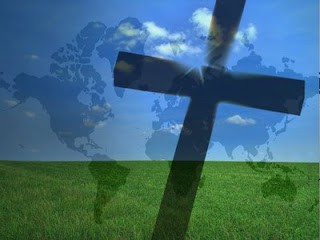 So it was two weeks ago this past Thursday. I was in a meeting, and I get a text message from my 29-year-old son Erik, who lives in the Twin Cities. Our brief exchange went like this:

ME: Yeah, there’s a guy who is SURE the Rapture starts on Saturday. From the standpoint of what Jesus (actually) said on the subject, the world will NOT end on Saturday.

ERIK: OK, but just in case you and mom do get raptured, can I have the snowblower?

Now this little text message exchange went on a while longer, but you get the picture. Erik and I were hardly the only ones “buzzing” about radio evangelist Harold Camping’s prediction that the Rapture would happen at 6 p.m. on May 21st. All over the world billboards got put up, possessions were sold, fiery “get-ready-for-the-rapture” sermons were delivered and “Left Behind” parties were planned.

Of course, we know now that our Lord didn’t return two weeks ago to gather up the faithful—all two or three hundred million of the “elite” whom Harold Camping predicted would “measure up” and qualify for the heavenly updraft.

Undaunted, though, Mr. Camping quickly revised his prediction, saying that it would be October 21st, not May 21st when the celestial fireworks would go off….so I’m sure we haven’t yet heard the end of this business.

And really, that shouldn’t surprise us one bit!

Because speculation about the “mechanics”of the End of the World has been around at least since the Ascension of our Christ, as recorded in today’s 2nd Lesson from Acts.

That question has been asked for nearly 21 centuries. “Is this the time…?” Is this when God is going to wrap up this whole business?

It’s an old, old question….that is also as fresh as this morning’s news. And why does it fascinate us so?

There is, to be sure, something vital at stake here. We long for God’s final purposes to be achieved. We ache for God to consummate, to draw to a decisive conclusion all of God’s saving work.

And the fact that God will do that is taken for granted by Christians of all stripes. The last word about Jesus in our Creed, after all, asserts that “he will come to judge the living and the dead.”

But how and where and when exactly will that happen? The Bible dangles out some hints about that, here and there….and that has led some earnest souls to try stringing together all those hints into some meaningful whole—to produce a heavenly timetable….

….even though the clearest and most compelling word of Jesus on the topic is usually forgotten. It goes something like this: “No one knows. Not the angels in heaven. Not even the Son. Only the Father knows….and he isn’t telling!”

The surest word we have on the “mechanics” of the End of All Things is that it’s way above our pay grade to know all the details….so we would be wise to focus on other things.

And fortunately, Jesus, tells us—flat out—what those other things just happen to be.

Reading from our text: So when they had come together, they asked him, ‘Lord, is this the time when you will restore the kingdom to Israel?’ 7He replied, ‘It is not for you to know the times or periods that the Father has set by his own authority. 8But you will receive power when the Holy Spirit has come upon you; and you will be my witnesses in Jerusalem, in all Judea and Samaria, and to the ends of the earth.

It is not for us to be privy to the heavenly timetable. That isn’t within our purview. We best leave it alone by leaving it to God.

What is within our purview, our capacity to grasp and “do something” about is this: bearing witness here and now in this world.

And if Jesus does provide any timetables or itineraries, it’s about this down-to-earth, here-and-now work that we HAVE been given.

Picture it, for the first Christ-followers, as a series of concentric circles…moving outward from Jerusalem.

Start here—in Jerusalem…and then move on out to the first ring of witness, Judea and Samaria—walking where Jesus walked….and then keep on moving out to territory the earthly Jesus never covered, “to the ends of the earth.”

This, my dear friends, is what God in Christ would have us be about—speaking, acting, living the Christ life…”witnessing” to the life, death and resurrection of our Lord….to the ends of the earth.

One of my seminary professors recalled a bumper sticker that said: “In the event of the Rapture, the driver of this vehicle will not be responsible.”

“Yes, that’s the problem with so-called ‘rapture theology,’” my professor observed. “No one is responsible for God’s people or God’s good earth.” We can become so heavenly-minded that we’re of no earthly use.

A Christian leader from Africa put it this way: “Oh, you American Lutherans! You’re always trying to fish INSIDE the boat.”

But Jesus is crystal clear: our place to fish is OUTSIDE the boat, in Jerusalem and in all Judea and Samaria, to the ends of the earth. Move on out, Jesus says.

But all too often, we prefer to hunker down inside the boat. If you follow the narrative here in the Book of Acts carefully, the first followers of Jesus don’t actually DO what Jesus told them to either until the 8th chapter of Acts.

The first disciples got “stuck” in Jerusalem, until the horrific martyrdom of Stephen (which we read about in Acts 7), which in turn led to the first general persecution of the Christian church in Jerusalem. THEN, finally (as it says in Acts 8:1)…”a severe persecution began against the church in Jerusalem, and all except the apostles were scattered throughout the countryside of Judea and Samaria.”

The call and command of the risen Jesus in Acts 1:8 comes to fruition only in the persecution “scattering” of his followers in Acts 8:1.

God in Jesus Christ calls us to move out, to move forward, bearing the Good News about Jesus, wherever we are sent.

And when we get stuck, mind you, God will get us unstuck.

In her provocative book, The Great Emergence, author Phyllis Tickle suggests that every 500 years or so, the Christian church holds a big rummage sale. Every five centuries, give or take, God turns the church upside down, in order to get us off our duffs and move us out once again, to recapture for a new generation the freshness, the sweet inviting aroma of the Good News of Jesus Christ.

I think we’re in such a turning-point time right now. Even the upheaval in the Evangelical Lutheran Church in America may be akin to what happened in the first eight chapters of the Book of Acts: God getting us “unstuck,” God getting us all shook up, so that God can get us all sent out once again.

And here’s how it always begins, though: in prayer and worship, as we await with Jesus’ first followers the gift of the Holy Spirit. How apropos for this service of installation for Pastor Matt Williams, whom you have called to help lead you in the two chief activities of the people of God: prayer and work, worship and mission--especially the good “work” of passing on the faith to the next generation of disciples.

Notice how our text concludes, with Christ’s followers caught up in prayer and worshp. Maybe that’s how the next chapter in our lives of faith will always begin: in prayer, gathered around Word and Sacrament, awaiting the fresh air of the Spirit to blow through us and scatter us and send us just exactly where God needs us to be--Out of the boat. Into the world. Bearing witness to Christ