God Will Not Be Silenced 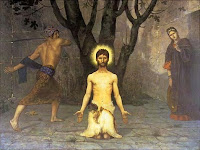 As I read this gospel story from Mark, chapter 6 two thoughts come to mind:

First, this is probably one Bible story you shouldn’t read to little children at bedtime.

Second, this doesn’t seem like a good gospel text for a Mission Sunday.

Read this story to little kids just before tucking them in, and they’ll probably have bad dreams about mean old King Herod and what he did to John the Baptist.

Read this story on “Mission Sunday,” and folks will just go, “Huh? What in heaven’s name does this violent “flashback” have to do with spreading God’s love, telling others about Jesus or serving in Christ’s name?”

I’m going to go way out on a limb, in these next few moments, though…and I’m going to argue that this gospel lesson, oddly and unexpectedly does say all sorts of things about God’s great mission to rescue us, to renew the creation and to set all things right, in Jesus Christ. If that sounds like a bit of a stretch—well then please humor me, for just a little while.

1. This is a good Mission Sunday text, first of all, because it’s embedded in a greater mission story here in Mark, chapter 6. Just prior to this morning’s reading we see Jesus sending out his disciples, two by two, to tell others about God fixing up the whole creation, making all things new. In the power that Jesus shares with his followers, demons are cast out and illnesses are cured—signs of God’s imminent recapture of the world, God’s in-breaking Kingdom!

In fact, it’s precisely this mission work of the disciples, that’s referred to in first line of this morning’s gospel lesson: “King Herod heard of it,” we read in v. 14, and the “it” is the mission, the wonder-working, healing power of Jesus, unleashed in the world. All that God was doing through Jesus’ disciples came to the attention of King Herod in a way that made him shudder.

Herod, you see, like most petty tyrants, liked to keep things calm in the little territory over which he ruled. But when Jesus sent out his disciples to be about his mission, they stirred things up. The local gossip was that maybe evem John the Baptist had come back from the dead—that Jesus, was in effect the reincarnation of John the Baptist.

When followers of Jesus are about his work…when disciples of the Lord do what Jesus commissioned us to do, heads will turn and people will take notice. Jesus’ name will become known! (cf. v. 14)

2. A second reason why this gospel text is a good Mission Sunday lesson is that it reminds us how God’s mission always encounters resistance in the world. Getting caught up in God’s work, taking our orders from Jesus, putting mission first, will (if we do it right!) get us “sideways” with some folks.

There are always, always opponents to God’s mission. Here in Mark 6, King Herod represents the opposition—big time! He had thrown John the Baptist into a dungeon, after all—not because John stole or kidnapped or killed someone….but because John the Baptist had told the truth—he had proclaimed God’s Word boldly, fearlessly. Rather than sweeping under the rug the extra-marital affair Herod had had with his own sister-in-law, John the Baptist called it what God calls such things: the sin of adultery.

Have you noticed how we almost never hear talk like that any more? If you’ve been reading the newspapers this past week you know that the governor of South Carolina, and (closer to home) an ELCA pastor over in Valley City, have both been caught in extra-marital affairs. The word we most often apply to such situations nowadays is the word “mistake.” The governor, the pastor, each made a mistake, which sounds like slipping on a banana peel or not adding up a column of numbers correctly on a tax return.

But there’s another name for this sort of monkey business—a word that comes straight from God. It’s the A-word, as in “You shall not commit adultery.” John the Baptist got tossed into a dungeon because he told Herod he had committed adultery. John was in the slammer for telling the truth about that. (And I’m guessing that John told that truth because he wanted to tell a bigger truth about how God forgives sin, including the sin of adultery!)

The word of God, the truth that God gives, never goes forth without bumping up against opposition. When we try to speak God’s word, God’s truth….when we become caught up in God’s mission….we’ll get sideways with some folks, something will thwart us. In fact, that sort of thing is proof positive--a sure sign that we’re working for God. True gospel-speakers, reliable truth-tellers (like the prophet Amos in our Old Testament lesson) are invariably ignored, opposed or attacked. In the Bible, the only popular prophets are the false prophets!

So, dear friends, if when you are seeking the things of God, if when you are trying to do God’s work, you sometimes feel like you’re spinning your wheels, or swimming in Jello, or facing flat-out antagonism from persons you thought you could count on—be of good cheer. Truth-tellers, faithful missionaries, real prophets are usually in hot water of one sort or another.

3. But here’s the kicker: even when God faces opposition, and even when God’s followers encounter obstacles….unforeseen opportunities and surprising possibilities pop up. That’s the third reason why I love this Mark 6 story on this Mission Sunday.

There’s a fascinating verse tucked away here in this gospel lesson. In verse 20 we read, “When [Herod] heard [John], he was greatly perplexed; and yet he liked to listen to him.” As wicked and selfish and awful as the tyrant Herod was….he was still intrigued by John the Baptist and his proclaiming of God’s Word. I picture Herod perhaps even sneaking downstairs and listening curiously to John the Baptist down in his dungeon!

So also, dear friends, we may stumble across some of our best opportunities to speak a word on God’s behalf, in the midst of perplexity and frustration. God may well send us a chance to tell someone about Jesus, not when the sun is shining and the sky is blue….but in the middle of some crisis, some argument, some disaster. God the Holy Spirit slips us chances to make a difference in the world, sometimes in the oddest, most inopportune times and places.

You have some folks from Zion/Amor who have a passion for God’s mission, especially with people who’ve been through a disaster. These Zion/Amor missionaries give themselves heart and soul to helping out, cleaning up, returning things to normal. But in the midst of that disaster clean-up stuff, they’ve learned to stop and listen to the people they’re helping.

Folks who’ve survived a flood or a hurricane or a tornado need to tell their stories. Your “mission crew” from Zion/Amor understand that we share God’s love when we stop and listen—not just when we speak and act.

4. Finally, this tragic tale from Mark 6 is a great Mission Sunday story because it reminds us how ineffective tyrants like Herod really are. This “flashback” story gives the impression that Herod (or that Herodias, his wife) “won” here. John the Baptist got his head cut off, and his friends buried his body—end of story!

But it wasn’t the end. That sort of thing, in God’s economy, is never the end of things. Despite all opposition, God and God’s Word win out. Herod silenced John, but he could not silence God. When, after John’s murder, Jesus sent out his followers, two by two, setting people free, exorcising devils, healing sicknesses….Herod realized that getting rid of John didn’t mean he had gotten rid of God.

God keeps coming back. Herod shuddered to think that John might have crawled out of the grave—he trembled to imagine that God would not be silenced just because God’s messenger, John, was beheaded and buried.

And even when this world did its worst to the One whose way John prepared….even when the world tried to “shut up” Jesus on the Cross, even when we sinners buried Jesus in a borrowed tomb….God was not done speaking.

God raised up Jesus—for real! And this risen Jesus, in turn, raised up followers…indeed, he keeps raising up disciples like you and me to keep the Good Word moving out into the world—a word that is spoken winsomely and acted out in deeds of caring for Jesus’ sake--a word that still sets sinners free.

That promise, dear friends, stirs our hope on this Mission Sunday. Whatever you say, whatever you do in the name of crucified and risen Jesus, will not be in vain. If as you’re helping someone recover from some disaster in their lives—if you simply stop to listen to them, if you speak Christian hope to them or express care for them in even the smallest of ways, that is a holy moment. God is present, active, and alive in that.