Blogging from the Big Easy: Day 3 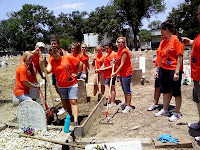 Friday morning (July 24) I hoofed it over to the Double Tree by 6:30 a.m. to meet up with about fifty youth and adults from Our Savior’s and Bethany churches of East Grand Forks. We then headed up Poydras Street to the Dome for the 7:45 a.m. ServantLife launch. We learned we’d be heading to the now-famous Lower Ninth Ward, to help spiff up a park in the St. Bernard Parish. The bus ride to our servant-site took us by some of the poorest parts of the city. What struck me was how some homes have been beautifully rebuilt (or replaced), but they’re right next to houses that are still uninhabitable from Katrina. Some of these abandoned homes look as though they were “hurting” plenty BEFORE the hurricane, signs of the grinding poverty of that area.

I have to hand it to the kids from East Grand Forks—they were real troopers. We started out by weeding some of the garden areas surrounding a kids’ playground….then raked the area and put down some new mulch. We also patrolled for trash, pulled up support rods from saplings that had “outgrown” them, and added reinforcing brackets to the playground equipment. As the day wore on and the temperature and humidity rose, we all started to wilt a bit—but the kids hung in there and kept working. We took frequent water breaks, chased a few toads and lizards, patronized a passing ice cream truck and chowed down on Subway sandwiches. Hats off to the Our Savior’s and Bethany youth, their adult advisers and their leaders—Chris Leach (Our Savior’s) and Pastor Bud and Claudia Johnson (Bethany).

A mid-afternoon shower and clean clothes were refreshing, and I snuck a few moments in a food court with free wifi, so that I could post my blog for Day 2. One of the puzzles of life in New Orleans, at least from my perspective, is that it’s relatively hard to find food. Lots of eateries are not open, or are open for very limited hours. Getting food has generally been a challenge at this Gathering, and it started on opening night with a “Tailgate Party” at the SuperDome that basically fizzled.

The evening mass gathering at the dome gave me a chance to sit with my daughter Kristen, and her fiancé, Aaron, who are both counselors with a group from First Lutheran Church of Sioux Falls (where Kris and Aaron will be married on August 8th). We arrived at the Dome before 6 p.m. and basked in the air-conditioned cool while warmup groups like Lost and Found shared their music.

Sad to say, I experienced the mass gathering with a fair amount of disappointment. On an emotional level, the event never seemed to bring people together, with alternating moments of serious engagement and playful humor. The mood seemed mainly “serious” last evening, and the program just got heavier and heavier. The first speaker was Spencer West, a young man who lost both legs (due to health issues) at age five; he spoke winsomely about overcoming challenges in life. Michel Chikwanine spoke later, about his horrific experiences as a child soldier in Africa. It was a moving presentation, raising our awareness of a still little-known reality in the Third World. There was a big hole in both speakers’ presentations, though, about which I’ll say more below.

It became clear that the headliners for the evening weren’t the speakers but the band, Skillet, who performed for about 45 minutes….though our church group, like many groups, left before the conclusion of their last number. My goodness! Skillet’s high-energy, high-decibel, pyrotechnic-backed “music” almost peels the skin off your face. The band clearly had many fans who streamed forward toward the stage and were loving every minute of the experience….while others among us (youth as well as adults) looked at each other with puzzled expressions (speech was impossible, the music was so deafening)….and after two “songs” I noticed significant “leakage” from the arena, as groups evacuated en masse. Because I had no idea WHAT they were singing, it seemed as though the attraction of Skillet is about spectacle far more than substance.

Which leads me to a little blogger rant I need to share. I admire the gargantuan effort that goes into planning and executing a mass Gathering like this….and although there are always glitches with gatherings (e.g. the food issue mentioned above)….there are also issues of substance that cannot be ignored. I might sum up my main gripe this way: the theme for this Gathering is Jesus, Justice, Jazz….but thus far I’d have to say that the Dome events have been long on Justice….with Jesus making only cameo appearances….and not nearly enough Jazz.

Re: the dearth of Jazz at this event--my heavens! We’re in NEW ORLEANS….and by my count the Dome events have had only ONE local jazz band, on the opening night. We know that there are all sorts of jazz groups, including Christ-formed musicians, that could share with us that art form most representative of the great city we’re visiting!

But it’s Jesus I’m missing the most at the Dome events. He gets a few tips-of-the-hat, now and then, but I’m not walking away from the SuperDome with the sense that it’s Jesus who brings us together—him alone—and it’s Jesus who sends us out into a hungry world (Justice) and bearing the Christ-light in the joyful hilaritas (Jazz!) of Christian discipleship. By my count, four of seven evening speakers thus far have scarcely MENTIONED Jesus, and the other three have hardly knocked the ball out of the park, in terms of re-centering our lives in Christ. (Jay Bakker tossed out the most scripture passages in his all-too-brief message, but he seemed so nervous and cowed by the size of the crowd that he never hit his stride on Thursday evening.)

When Jesus isn’t clearly front and center in our Gatherings, they start to seem like something other than Christian assemblies. Right now, I’d say that the evening mass events in New Orleans have about them the aura of conventions of Young Democrats. (I wouldn’t be happy if they seemed like Young Republicans gatherings, by the way!) We talk about “making a difference in the world” and “changing the world,” because we’ve lost the sense that God is bringing in a New Creation through the life, death and resurrection of Jesus Christ. God’s work isn’t just “making a difference in the world.” It’s the amazing miracle of making all things new. God’s mission catches us up in getting ready for the New Creation that God is bringing to us (not the "better" world we are producing, thank God!)

A related note: I and others have observed and talked about the tendency for the Dome events to be performances or spectacles rather than participatory assemblies of Christian folk. Case in point: there has been virtually no sing-along music in the Dome events, thus far. Tragic!

That’s why I was so glad to end my day with devotions at the SpringHill Suites, hosted by Trinity Lutheran of Moorhead. My, but these young people (all 92 of them) know how to sing and be together with grace and good humor. I was introduced to a new, lilting version of Kumbaya that just might give that old song a new lease on life. Kudos to Kathy Hunstad, AiM, who directs youth ministries at Trinity, Pastor John Hulden (who is attending his 11th national youth gathering, though he started out at the age of seven!) and a splendid cadre of other Trinity staff and adult advisers. It was the perfect ending to a topsy-turvy day.
Posted by Larry Wohlrabe at 8:26 AM