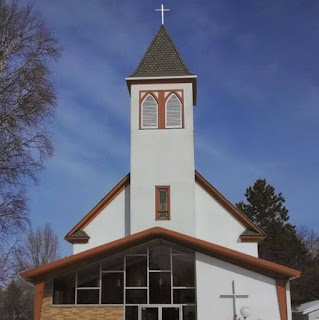 I love church anniversaries.   Celebrating with you the centennial of your beloved congregation—it’s one of the things I’ve enjoyed most about serving as bishop!

And why?  It’s that anniversaries afford us a rare opportunity to step back and take a good look at ourselves.

Since most of the time we simply live in the church or as the church…we seldom look at the church….

…But anniversaries invite us to pause, step back and look again at our church.   And we do that chiefly through telling stories and looking at pictures that depict how our church developed over time…

…and as we do so, we typically begin with stories about church’s origin.

“Origin stories” are often both fascinating and memorable…and your particular origin story is particularly gripping.

It goes like this:
“In 1919 a lively mission minded young pastor, A.O. Odegaard, came to the Blackduck parish.  He also served the congregations at Saum, Foy and Shotley.  One day, in the latter part of the summer of 1919, Pastor Odegaard was on his way to Shotley and stopped in Kelliher to have his horse shod.  [As he later recalled], “Standing in front of the blacksmith shop I felt a hand upon my shoulder.  Looking about I saw a man…none other than Sam Dolgaard…..[who] wanted to know why I did not start [some] mission work in Kelliher.”  When Pastor Odegaard explained that he had been told there were no Lutherans in Kelliher, Mr. Dolgaard took over.  They spent the rest of the day calling on 18 Lutheran families…..That [very] evening, after a good dinner at the Dolgaard home, plans were laid for the new congregation in Kelliher.  On September 19, 1919, Our Savior’s Lutheran church was organized with 52 souls as charter members…”

What first grabs my attention here is the fact that Our Savior’s almost didn’t get started!   What if Pastor Odegaard’s horse hadn’t needed new shoes?  What if Mr. Dolgaard hadn’t stopped by the blacksmith shop?   What if Sam hadn’t worked up the nerve to ask why the local Lutheran pastor wasn’t working in Kelliher?   What if the two of them hadn’t had time to head out and actually visit those 18 Lutheran families?

Make no mistake about it:  Our Savior’s Lutheran Church came real close to not happening!

But purely by the grace of God Our Savior’s was birthed 100 years ago, starting out with those 52 souls.  Your congregation—like every congregation!—was an unanticipated, undeserved, sheer gift from God.

And that’s how most origin stories go.   I know that from my own origin story.

You see, my parents were quite a bit older when I was born—my dad having been born in 1914, five years before your congregation began.    Lawrence and Robert Wohlrabe had two daughters in the early 1940s….and then a decade later—ten years during which my mother endured a series of miscarriages!—finally a son came along on September 11, 1954.

My origin story reminds me that even though the odds were against my parents having that third child—it still happened, I happened, which means God must have wanted a world with me in it.   My life—like your life and Our Savior’s life—all life is an unforeseen, unexpected, sheer gift from God.

The stories we tell on anniversary days point us beyond the “wouldas, couldas and shouldas” of human history….shining the light of God’s grace on all the wonderful that DID happen and are still happening because God had another idea.

So Our Savior’s was founded...and three things stand out in the story of your church’s earliest years:
1. First, like nearly all the congregations in our synod, your church lived as a faith-community (in whatever space they could find or rent) for a long time before you actually had a church building of your own.   Though established in 1919, construction of Our Savior’s building didn’t get started until three years later, under the direction of August Thorpe—he’s the daredevil in the circle on the cover of your anniversary booklet (showing us a construction site that was definitely in the pre-OSHA era of American history!!!)

2.   Second, while the men were doing most of the grunt work in construction, the women were just as busy—cooking up a storm, hosting church dinners for local lumberjacks whose contributions bought the building materials.   I dare say the women in their aprons were likely “the push” behind the men with their hammers and saws and scaffolding.  Your foremothers here at Our Savior’s may not have “gotten the vote” until 1927, but I bet they were calling the shots from the get-go!

3.   Third, the building that was finally dedicated in 1928 had an amazing steeple—that reached way up above the treetops!—with a handmade cross fashioned and installed by another daring steeple-climber, your first pastor A.K. Vinje who declared:  “I hope the cross was symbolic of what I was trying to do in a spiritual way, namely holding the Cross of Christ high that men [and women!!] might be attracted to that Cross and find their Savior there.”

My dear friends, we just don’t tell juicy stories like these on regular Sunday mornings….but on banner days like today, we eagerly dig into our treasure-chest and remember how graced, how gifted, how wonderfully Holy-Spirit-serendipitous it is that congregations like yours were started and grew and formed people in faith whom God called to serve their neighbors and their world.

And this morning, as we step back and take good look at ourselves through the lens of history, we also are reminded about how all our stories are actually reverberations of stories that came long before us…

….which is what makes our Second Lesson from Hebrews 11 & 12 so appropriate this morning.

The great eleventh chapter of Hebrews regales its readers with stories about how God has been calling people to faith for centuries….inspiring all manner of persons to live out their trust in God in ways that have made a difference in God’s world!

So this morning—as we tell stories about Sam Dolgaard and Pastors Odegaard and Vinje and the Ladies Aid that actually pre-dates the founding of your congregation!....

….as we tell these Our Savior’s stories…we do so against the backdrop of God’s great history-enfolding, world-redeeming Story…filled with colorful characters like Rahab the prostitute of Jericho…and judges of Israel like Gideon, Barak, Samson, and Jephthah….along with kings like David and Solomon…not to mention a host of other women and men whose names have been forgotten but whose faith-inspired deeds live on.

My friends, we add some “Our Savior’s stories” today to the scores of biblical faith-stories that played out long before us….stories of nameless ones who “through faith conquered kingdoms, administered justice, obtained promises, shut the mouths of lions, quenched raging fire, escaped the edge of the sword, won strength out of weakness, became mighty in war, put foreign armies to flight”….

We remember and give thanks for the heroes and heroines of Our Savior’s story, who lived through hard times like the Great Depression and World War II….alongside much older stories of anonymous souls who “ suffered mocking and flogging, and even chains and imprisonment….destitute, persecuted, tormented” but buoyed up, always, by faith, just as our forebears and you and I are still sustained for witness and service today, in 2019!

But why—why “pull out the stops” and retell these old, old stories?

Surely not for the sake of losing ourselves in a gauzy, sentimental cocoon of nostalgia!

No, my dear friends!   If we look back today, it is only so that we can look forward--anticipating and leaning into God’s tomorrow in Jesus Christ.

For all our stories would be worthless, without the central Story, the shining witness of Our Savior himself, “the pioneer and perfecter of our faith, who for the sake of the joy that was set before him endured the cross, disregarding its shame, and has taken his seat at the right hand of the throne of God.”

We gaze at the old photos and we tell our ancestors’ stories today, only because our lives are completely bound up in the salvation story of Jesus our Savior….who goes before us, beckoning us to follow him out into God’s 21st century world, “laying aside every weight and the sin that clings so closely,” all so that “looking to Jesus” we might “run with perseverance the race that is set before us.”

Christ isn’t finished with you here at Our Savior’s—far from it.   There are still souls in need of a faith-home, still neighbors who are hurting, in a world desperate for hope, longing to lay their eyes on Jesus, the pioneer and perfecter of our faith.

Pastor Vinje’s cross is still calling us out.