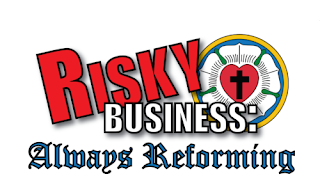 “I bind unto myself today the strong name of the Trinity by invocation of the same, the Three in One and One in Three.”

This ancient creed from the pen of the great missionary who brought Christ to Ireland has been wed to a tune that’s entitled St Patrick’s Breastplate….thus reminding us that the “strong name of the Trinity” is meant to be worn like a garment all the days of our lives.

But this isn’t just any garment.  A breastplate is always more than a “fashion statement!”

You wear a breastplate only when you’re doing something so dangerous, so risky you could lose your life doing it.

When knights of old were thrust into battle their breastplates were the parts of their armor that protected their “innards”--their heart, lungs and other vital organs.

So when Patrick-who wasn’t sailing in “tourist class”—made his way from Great Britain to Ireland, he did so fully intending to take on the pagans who ruled the roost—paving the way for the Greatest Good News about the One and Only God:  Father, Son and Holy Spirit.

And when Patrick made that 5th century mission probe into Ireland—believe me!--he was dressed for the occasion.  Patrick put on the whole armor of God, including the center-piece, the breastplate that protected his life:  the strong name of the Trinity bestowed on Patrick with the sign of the Cross in his baptism.

Patrick the missionary bishop thus literally “wore” God on his body—the Three in One and One in Three true God—Father, Son and Holy Spirit.

Now I realize that talking about armor and spiritual warfare is out of vogue these days.  Enlightened, gentle souls have tried to scrub out all that outdated militaristic language from our hymns and liturgies.

But this “cleansing” has not been complete —thank God!—because it’s hard to escape the sneaking suspicion that the Evil One has yet to surrender the field.

…which is why serving God’s mission in the world is always more than a “walk in the park.”

It is still, it has always been, and it shall always be risky business—a reckless, audacious venture undertaken in the face of stiff opposition…some of the worst of it arising from right inside of us, from the old Adam, the ancient Eve, who has yet to fully surrender.

These twin realities, of resistance “out there” and resistance “In here” bleed through this gospel lesson as we join the eleven surviving disciples, climbing that  mountain in Galilee, where the Risen Christ met them.

Heavens to Betsy--what a motley crew those eleven fellows were—what a mixed bag of believers and skeptics—who, as Matthew takes pains to observe, “worshiped [Jesus], but some doubted”

Did you catch that?   Here they were, beholding the One who was crucified and resurrected, standing right before them—but if Mr. Gallup had been conducting a poll that day, Jesus wouldn’t have received a 100% approval rating even from those who knew him best!

And yet, this same Jesus insisted on commissioning them--sending them out to take on the whole world….with nothing but his commands and his promises.

Can you imagine a more risky business than that?  Did those eleven rag-tag guys have a ghost of a chance, making good on Jesus’ Great Commission?
Apparently, though, this was the Risen Christ’s only plan.   He had no “Plan B” to fall back on.  Christ simply issued his marching orders:  “go…make disciples…baptize…teach!”

And then, like a big red ribbon tied up in a bow, Jesus wrapped those audacious commands inside an even more amazing promise:   “And remember, I am with you always, to the end of the age."

You can do this, Jesus told them.  You can handle this risky business, because I’ll always have your back.

It’s what we do—even we lumpy, pasty Lutherans who are so often written off as bland, milquetoast, inconsequential folks.

Even we “militantly modest” Lutherans who’re hardly ever 100% sure of ourselves, even we somehow keep on keeping on.

It’s what we do, we risk-taking Lutheran followers of the Risen Christ.

Blame it on a feisty German monk named Martin who 500 years ago took on the entire Church and the whole world—just because he’d been taken captive by God’s sin-forgiving, barrier-breaking, future-opening Word in Jesus Christ.

Not that even feisty brother Martin never had his doubts about the whole enterprise we now call the Reformation!  Hardly!   More than once Martin was wracked by doubt, looking in the mirror and asking himself “Just who do I think I am—defying the Pope in Rome?”

When Martin Luther wrestled with his own doubting heart, though, he remembered who he was and Whose he was:  “I am baptized!” he shouted!   And in the strength of that confession Luther changed the church and the world.

But that’s just what Lutherans do, don’t you know?

It’s why young Katie, a cloistered nun, hid with her sisters in a bunch of empty herring barrels to escape from their convent and make their way to Wittenberg to feel firsthand the refreshing breeze of freedom in Christ.   It’s why Katie, sworn to celibacy for life, broke that vow in order to make another vow, a marriage vow to Martin in 1525—just  to “spite the devil” as her husband colorfully put it.

But that’s the kind of things Lutherans do.

It's why Henry Melchior Muhlenberg, cross-marked in his baptism, set sail from Halle, Germany in 1742 for the wilds of life on the North American mission field…

It’s why Sister Elizabeth Fedde left Tromso, Norway in 1883 to bring the Lutheran deaconess movement to North American…a movement that produced a host of Lutheran hospitals, nursing homes and other social ministries.

It’s why Dietrich Bonhoeffer forsook the safety of London to return in 1935 to his homeland, Germany, and to resist the Nazis to the point of dying a martyr’s death ten years later.

It’s why Leymah Gbowee, striding in the strength of her baptism, organized other strong women to say “Enough!” to the men of their country who had kept Liberia locked in a civil war fifteen years ago.

That’s the kind of risky stuff that Lutherans who bear the cross of Christ on their brows….it’s what we do!

And I’m not just talking about famous or semi-famous Lutherans either!

You and I, ordinary, garden-variety Lutherans also make choices, take stands, and embark on risky adventures--because that’s who we are as baptized ones, bound to the strong name of the Trinity.

I know this, because I’ve seen you in action….

I’ve seen congregational presidents who shun the easy way out and speak uncomfortable truths to their fellow Lutherans.

I’ve met youth who can’t wait to give a year of their life to Christ as YAGMS, Young Adults in Global Mission of the ELCA.

I’ve witnessed young parents and other caring adults, who are passionate about forming Christ in the next generations of Lutheran disciples.

I’ve heard Lutherans standing up for their neighbors who happen to be refugees or immigrants or adherents to other faiths or indigenous folks who lived on this continent long before many of our ancestors showed up.

All of that is risky business—and it’s what we Lutherans do!

Better yet:  it’s what Christ, who promised never to leave us, does in and through us who are baptized into the strong name of the Trinity.

“ I have been crucified with Christ,” wrote the great proto-Lutheran,  St Paul, “and it is no longer I who live, but it is Christ who lives in me.”
Lutherans love that kind of stuff—sends shivers down our spines.
Because we know that it’s always Jesus who gets us into this risky business….and it’s God who is always reforming, reshaping and renewing us in the strong name of the Trinity—Father, Son and Holy Spirit.

Amen.
Posted by Larry Wohlrabe at 4:00 AM