Mission on the Margins 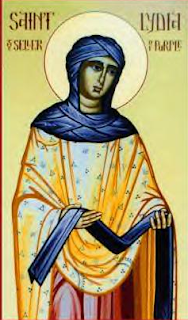 Many moons ago when I was a wee little lad in Sunday School I loved stories like this one in Acts 16—stories of Paul the intrepid missionary, criss-crossing the ancient world, preaching the Good News and winning persons for Christ.

Paul, seemed like a super-hero to me:  always marching from triumph to triumph, the infant church growing by leaps and bounds…

Only later, as I began to explore the Bible more slowly and closely and in greater depth—did I come to realize these stories in the Book of Acts are more complicated than that.

The Apostle Paul didn’t always get to where he thought he was going.  He was often sidetracked, bushwhacked, pushed away, thwarted.

What this morning’s reading from Acts fails to mention is that before Paul had his famous vision in the night—a vision of a man from Macedonia, pleading with Paul to “come over to Macedonia and help us”—what might be easy to miss here is that the invitation into Macedonia was preceded by two failed attempts to reach other destinations—to Asia first, but that didn’t happen….and then to Bithynia, but that was a bust, too! (Acts 16:6-8)

Paul in the power of the Holy Spirit, understood these two failed attempts as ways that God was in fact directing him elsewhere….which is a good reminder that missionaries like Paul encountered obstacles and closed doors at least as often as they were welcomed with open arms.

Nevertheless, the point is worth pondering, that missionaries like Paul had to take “No” for an answer, more often than we might guess.

Only after hearing a “No” or even a series of “No’s” did the mission proceed….and where exactly did Paul end up?

In the most unlikely of places:  down by the riverside outside Philippi, surrounded by a bunch of women.

THIS was the journey’s goal that God had in mind for Paul?  Really?   Who’d have ever imagined that Paul had to bypass Asia and skirt around Bithynia, just to get to Philippi and a gathering of women in prayer—women trying to make their way in a man’s world!

We must take the full measure of all the borders that Paul and his entourage were crossing here.   Pious Jewish men in Paul’s day often prayed a prayer of thanksgiving that went like this:  “I thank you Lord that I was not born a slave, a Gentile or a woman!”

And here was Paul—risking life and limb on the Mediterranean Sea just so he could hobnob with a bunch of Gentiles who also happened to be women.

But this is exactly how it was meant to be.   God directs Paul and company to persons on the margins of life in that day, women who are often left out of the historical record, women eager to hear the Good News about Jesus…women who, in fact, became the foundation of the church in Philippi.

One of these women is actually named here--Lydia, who seems to have done rather well, living in a man’s world.  Lydia was an entrepreneur, a dealer in expensive textiles, high-end merchandise that favored the rich, rich color purple.   Lydia, whoever she was, was a businesswoman who headed up her own household.

And when she heard Paul speak about Jesus, she believed what she heard and was baptized, along with her whole household….and then (as Eugene Peterson puts it in his wonderful paraphrase[1] of Acts) “in a surge of hospitality” Lydia invited Paul and his fellow missionaries to stay with her for a while.

In other words:   Lydia’s house became the mission center for the Christians of Philippi who became the most beloved of all the churches Paul founded.

Who would have guessed?   That after facing obstacles and closed doors, Paul’s missionary meanderings would lead him to Lydia’s doorstep, starting a church with the women’s group first—women living very much in a man’s world?

But really—isn’t that just like God, to work in such a fashion!?

God, the God we know best in Jesus Christ, never shrinks back from obstacles.   God loves maneuvering around or walking through closed doors.  God in Christ is just no good at taking “No” for an answer.   God prefers, really prefers “the scenic route.”

And God gets the biggest kick out of working with the most unlikely of characters.   If some group is living on the edge of human society, if some persons hang out there on the margins—God in Jesus Christ is always making a beeline for them, seeking them out, finding them, taking up residence with them, working in them/with them/through them.

We see this right in the story of Jesus.   As the gospels tell that story Jesus is always on the move, forever encountering strangers, most often heading straight towards all the wrong crowd.  It’s as if they—the pitiful sick ones, the most notorious sinners, the accursed outsiders—were the objects of Jesus’ most ardent affection.

We see this in the long, long story of the church.   Rodney Stark, a sociologist of religion, contends that one of the reasons the Christian movement grew in ancient times was that Christians didn’t hightail it and flee when plagues were killing off people in droves.   Early Christians stayed with the sick, cared for the dying, risked catching the same disease with them—and the world took notice!

We see this in the global church, especially in places like our companion synod in India.  There is a reason why so many members of the Untouchables, the Dalits—those below the lowest rung of India’s social ladder—have embraced Christ and his church.   It’s because the Dalits see in Jesus a kindred spirit, a fellow Dalit, despised by the world, good-for-nothing, edged out of society and hung on a cross.

We see this much closer to home, right here in northwestern Minnesota.  Folks in the great coastal cities who make up the bulk of the U.S. population consider us “flyover” territory—that vast midsection of our continent that busy folks are forced to fly over to get from crowded New York to sprawling Los Angeles.

Even here on the territory of our synod, I know what folks say about your part of our territory, the area north of Highway Two.   I visit with pastors from other parts of the country and seminarians eager for their first calls, and I point out this very area on the map—and many of them look at it and say:  “You want me to go way up there?   Why, there’s nobody up there—on the maps it doesn’t even look inhabited!”…..to which I love to respond:  “Yes, indeed, there are people up north of Highway Two….fine people, good salt-of-the-earth folks you could come to love—and they could come to love you…..and guess what:   there’s another whole country called Canada just north of us!”

This missionary journey of Paul that we get a brief glimpse of here in Acts 16—this missionary vocation to which Paul was called “worked on him,” profound shaping his faith and sharpening his proclamation.   By constantly calling Paul to the edges, the very margins of society in the first century, by plopping Paul down in places like that prayer gathering of women just outside Philippi….God made Paul see that God allows no obstacles to stand in his way, that God has a thing for those living on the edges of life, those who for all the world look like losers—they, they are the special objects of God’s deepest affection.

Which is why, in one of Paul’s greatest epistles, he could write words like these:   “Consider your own call, brothers and sisters: not many of you were wise by human standards, not many were powerful, not many were of noble birth. But God chose what is foolish in the world to shame the wise; God chose what is weak in the world to shame the strong; God chose what is low and despised in the world, things that are not, to reduce to nothing things that are, so that no one might boast in the presence of God. He is the source of your life in Christ Jesus, who became for us wisdom from God, and righteousness and sanctification and redemption, in order that, as it is written, ‘Let the one who boasts, boast in the Lord.’”  (I Corinthians 1:26-31)

In the name of Jesus.