More Than Meets the Eye 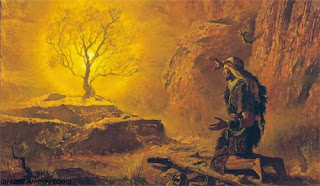 
There’s more than meets the eye here in this gospel lesson.


At first glance, this sounds like an off-the wall argument in a high-falutin’ debate society.  The Sadducees conjure up a wild-hare scenario—and then try to use it to prove a point.


To understand this crazy business, you need to remember that there wasn’t much of a social safety net in Jesus’ day.   There was no Social Security, no county human services department, no “welfare.”   Women and children were especially vulnerable—and usually regarded as little more than property.


When Jesus walked the earth, a woman needed a man in her life, just to survive.   So girls lived in their father’s home until they married, and then they belonged to their husbands.  If all went well, the couple would produce children, especially sons—and the sons would watch out for their aged parents, especially their widowed mothers.


But what if all that went haywire?   What if a woman’s husband died before giving her children?   The man would have failed to produce heirs; and the woman would lose whatever old-age support system she might have had.    So Moses devised a backup system:  if a woman’s husband died prematurely, her brother would take her as his wife—to produce children, especially sons.


Now I know this sounds strange and distasteful, especially for women and girls….but you have to “get this” in order even to understand the point these hyper-traditionalist Jews, the Sadducees were trying to make here in Luke 20.


The Sadducees come to Jesus, with this scenario of a brother taking his deceased brother’s wife—and the Sadducees drive the whole business to the point of absurdity.   What if not just two brothers, but seven brothers all took the same woman as wife—each one of them dying before fathering a child with her?   What if that happened?   Whose wife would the woman be after they would all be resurrected from the dead?


But there’s more here than first meets the eye.   And Jesus says as much.    Without even responding to their seven-husbands-one-wife scenario, Jesus goes back to the heart of the matter and talks not about the hows and whys of the resurrection.


Rather, Jesus speaks about God.    The Sadducees’ God was just too small.   That’s why, as the old joke goes, they were “sad-you-see” (Sadducees).


God is not the God of the dead, declares Jesus to the Sadducees.   God is bigger than death.   God is not limited by the constraints of this world—with its imperfect justice, its laws and traditions, its comings and goings, its births and deaths.


And because God’s life extends above and beyond all that, so does everyone who belongs to God—living or seemingly dead though they may be.


The Sadducees want to speak about logical impossibilities.   But Jesus insists on speaking of God, the same God who spoke to Moses out of the burning bush (in Exodus 3) and identified himself as the God of Abraham, Isaac and Jacob.   God speaks of Moses’ ancestors—long dead and buried—but God speaks as if those ancestors are “right there”—no longer dead, but alive in the fullness of God’s own unending life.


There’s more here than first meets the eye.    Jesus is always doing that sort of thing in the gospels—always busting out of old arguments and pinched, brittle assumptions that hold us back.  Jesus is always breaking open the astounding promises of God—always helping us see above and beyond the circumstances of the moment.    If there is any hope for us, says Jesus, it is not in ideas or possibilities or even doctrines like the “doctrine” of the resurrection.  Our hope is always in God—the God of the living, the God who insists on sharing his own eternal life, even with the likes of you and me.


There’s more here than first meets the eye.    That’s a watchword for us, too—sons and daughters of God, children of the resurrection, destined in Jesus Christ to live forever in the fullness of God’s own life.  When our God starts looking “too small,” when things appear too cut and dried to us, as they did to the Sadducees—we need to take another look at it, in the light of God’s own boundless, unending life.


Take ourselves for example.


There’s more to us than meets the eye.   Do we have any idea what God accomplishes in God’s world through our daily lives?   Do we see ourselves, as God sees us, bearing his light from the baptismal font out into our homes, our schools, our workplaces, wherever we travel the other six days of the week?   Do we have an inkling of all the good God does through our hands, our voices, our feet in the world?


That applies to our congregations, as well.  How do you look at the community of faith that gathers week in and week out?   Do you ever see it as God sees it—as an outpost of the in the world?   Do you realize how your congregations are beacons of hope to those around you—just by your coming together, your cracking open of the Word of God, your baptizing and feeding of one another with Christ’s body and blood—all signs of the life of the world to come?


That’s especially true when you pause to consider all the ways God is forever turning you disciples of Bethany and Mt Carmel churches “inside out” for the sake of the world.  As the love God has lavished on you overflows through you to the world—what happens then?


·      The outlines of God’s promised future start to become clear.


Because God is so much bigger than we can even imagine….because God fills up both time and eternity….because God also stoops into time and space to walk with us and among us, God can do amazing things even with the dollars we offer whether they be many or few.


·      God calls out and equips ordinary folks for servant ministries.


·      God sends ambassadors, healers, teachers of the faith across the globe.


·      God raises us up—daughters and sons of God, children of the resurrection who live not in paralyzing fear but in liberating hope.