Picking a Fight With Death 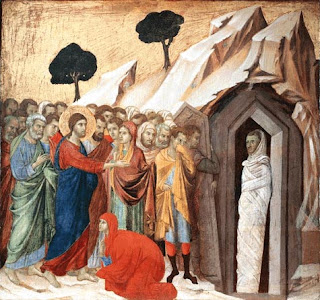 In this gospel lesson we hear two of the gems from the Bible.

One of these gems is verse 25, where Jesus declares: “I am the resurrection and the life…”

The other comes ten verses later: “Jesus began to weep” or in an older translation, simply: “Jesus wept”—the shortest verse in the Bible.

The first of these verses cheers us when we mourn: “I am the resurrection and the life.” And the second is prized by squirrelly confirmation students, searching for a quick and easy Bible verse to memorize: “Jesus wept.”

At the risk of over-simplifying things, these two verses encapsulate this entire 11th chapter of St John’s Gospel. In fact, they summarize the whole Good News—they encompass our entire life of faith.

Because one of the things everyone needs to know about Jesus is that he wept. Jesus cried, he was overcome with grief. Which is to say: Jesus is really human, one of us.

“Jesus wept.” Jesus was not protected from or aloof from the hard edges of his humanity. Jesus didn’t get a “free pass” from all of that—the dregs, the deep heartache of grief.

“Jesus wept.” We need to “get that.” Our Savior’s tear ducts were fully functional. Our Lord empathized with, responded to others. Our Master walked where we all walk.

“Jesus wept” even as we have wept and we shall weep again. And I’m not talking about crocodile tears, or crying over a sad movie, or blubbering over a silly soap opera. We shall weep as Jesus wept, because death is the pits, because it’s awful losing a friend.

“Jesus wept,” John 11:35, sums up one key thread of this story. God’s Word in human flesh, was moved to tears. Jesus gets it. He is one with us.

But these tears of Jesus are not tears of despair. Verse 33 of our gospel lesson tells us that “when Jesus saw [Mary] weeping, and the Jews who came with her also weeping, he was greatly disturbed in spirit and deeply moved.”

There is a distinct “flavor” to these words in the original Greek. “Greatly disturbed in spirit and deeply moved” –the phrase depicts Jesus shuddering, being shaken to the core. There is even a hint of anger here. Jesus groans as he approaches Lazarus’s grave, because Jesus knows in his bones that this just isn’t right. This state of affairs—in which death brazenly calls the shots and claims the last word—this cannot go on.

So in Jesus weeping there is an undercurrent of righteous anger—indeed a defiance of death stirring deep within Jesus. And we need to notice that, too, because Jesus doesn’t travel to Bethany just to commiserate with his friends, to mutter his “ain’t it awfuls” with all the other mourners.

Rather, Jesus travels to Bethany to pick a fight with death—to announce that death is about to be up-ended.

Which leads us to the other key verse in our gospel lesson: “I am the resurrection and the life.”

When Jesus shows up to wail with Lazarus’s survivors, he is chided by Martha. “What took you so long?” she asks. “If you hadn’t dilly-dallied you could have prevented this from happening!”

But even as she chides Jesus, Martha is still hoping that Jesus might yet “do something” about this sorry situation. And even as Martha confesses that Lazarus will rise again on the day of resurrection—Jesus interrupts her with an astonishing claim: “I am the resurrection and the life.”

Jesus moves resurrection out of the realm of speculation about a longed-for future. Jesus redefines life as so much more than a natural force in the world. In Jesus, resurrection is walking around on two feet. Life is pushing its way through the crowds that surrounded Jesus.

Which may explain why Jesus tarried for two extra days before coming to Bethany. As a preacher friend of mine once put it, Jesus wanted Lazarus to get “good and dead,” four days in the grave, with all traces of his spirit having vanished from the scene….

Jesus needed Lazarus to be “good and dead,” so that everyone would know that Jesus didn’t just have a knack for preventing disease and death….but that he was about to undo death, even after it had invaded the home of friends he loved.

“Jesus wept,” because death is real and nasty and it makes claims on us that Jesus will not allow to stand. Jesus marches to Bethany in his own good time, because he is going to undo death. Jesus is vetoing death’s premature verdict over Lazarus’s life.

Jesus who actually is resurrection…Jesus who truly is the only life worth living…..Jesus insists on going to Bethany, heading out to the tomb, having the stone rolled away (despite the stench of decay in the air)….Jesus takes charge here, because the Resurrection and the Life has come to pick a fight with Death—and that’s a fight that Death will never win.

And as if that were not enough, Jesus catches up those around him in the miracle of this sign. Instead of crawling into the tomb and single-handedly dragging Lazarus out—Jesus calls to Lazarus, Jesus issues an executive order in the full confidence that Lazarus will hear it and obey.

And when Lazarus appears at the door of the tomb, Jesus hustles the whole community into action: “Unbind him, and let him go.” Peel back the burial shroud, untangle the bands of grave-cloth, turn Lazarus loose!

Jesus returns to Judea—where an attempt had just been made on his life (at the end of John chapter 10)….Jesus marches resolutely to Bethany, to the tomb of Lazarus, in order to pick a fight with Death.

But this is only “Round One” of a greater battle our Lord waged with Death. Virtually every detail is an early echo of a drama yet to be played out. As noted preacher Fred Craddock has observed, “The passion of Jesus bleeds through the surface of [this] story….[When he comes to Lazarus’s tomb] Jesus is experiencing something like a Gethsemane, for he knows that calling Lazarus out of the tomb means that he must enter it.” (Fred Craddock, “A Twofold Death and Resurrection,” The Christian Century, March 21-28, 1999.)

When Jesus was arrested, tried, executed and buried he dealt Death a knockout punch. Call it “Round Two” in his fight-to-the finish with Death. The Resurrection and the Life won that round—for you and for me and for all people everywhere.

But there is more: the story of Lazarus, the passion of our Lord Jesus….these core narratives of faith “bleed through” into our own lives of following Jesus.

We weep—as Jesus wept—because death is the pits, because like Jesus we aren’t just sad, but we’re also mad that death robs us so brazenly.

This state of affairs will not stand, though. Our Lord Jesus Christ has seen to that. Whatever sort of tomb we’re stuck in, wrapped in stinking grave-cloths—Jesus calls us out of that. Jesus issues an executive order to us to leave death behind—the death we bring upon ourselves (our sin), the death that is foisted on us (which we call evil), the death that brazenly pretends to have the last word.

Call this Jesus’ “Round Three,” which continues to play itself out in our lives, here and now. Jesus is still catching us up in this fight to the finish with death. Jesus “calls us out”—out of whatever tomb we’re stuck in.

And—lo and behold—Jesus even enlists us, to be part of the action, calling out others….turning loose anyone whom Jesus places in our paths, just as Jesus enlisted Lazarus’s neighbors to unwrap the bands of grave-cloths, and turn him loose.

What a wide, deep, rich story this is.

From Jesus’ weeping to Jesus picking a fight with death….this story tells the only story worth knowing, Jesus’ story, which has become our story.

Jesus wept—as we shall weep. But Jesus wept as the One who would deprive death of the last word. Jesus claims that Word for himself: “I am the Resurrection and the Life. Those who believe in me, even though they die, will live, and everyone who lives and believes in me will never die.”

In the name of Jesus. Amen.
Posted by Larry Wohlrabe at 7:09 PM