Birth Pangs of the New Creation 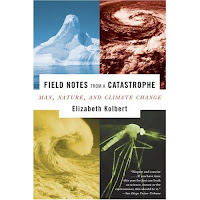 C.S.Lewis once said that “God whispers to us in our pleasures, speaks to us in our conscience, but shouts in our pains: [pain] is [God’s] megaphone to rouse a deaf world.”

If that is true, then God must be virtually bellowing to us who have read Elizabeth Kolbert’s little book, Field Notes From a Catastrophe—Concordia’s “Summer Book Read” for 2008. Last spring all of us on the Board of Regents were given a copy of this book, and I decided to read it because I thought it would be good for me—sort of in the same way that having a colonoscopy is “good for me.”

Kolbert’s writing style is lean and understated, but her message is unmistakable: we and this lovely world we call home are hurting….and hastening toward a DAI, which (we learn) is shorthand for “dangerous anthropogenic interference” –that is, the steadily rising level of carbon dioxide in our atmosphere and the global warming it is triggering.

Kolbert takes her readers on a globe-trotting scavenger hunt, noticing and collecting artifacts from all around the earth, all pointing to the real and relentless advance of global climate change. She is eclectic in the evidence that she marshals—whether it is the thinning of Greenland’s massive glaciers, the inexorable disappearance of Arctic sea ice, the thawing of the subpolar permafrost, the surprising expansion of the European comma moth’s habitat, or the sudden extinction of Costa Rica’s golden toad population. Kolbert just keeps rolling on, interviewing scores of scientists with multi-syllabic specialities, each one raising the ante, testifying to the stunning marks all around us that Mother Nature is not happy—that the fate of the planet hangs in the balance.

All of this is “news” these days—especially in the midst of two weeks of national political conventions as we see Gustav bearing down on the same Gulf Coast that was decimated by Katrina just three short years ago. Kolbert, in her book’s new “Afterword” conveniently informs us that between 1975 and 2004 “the proportion of hurricanes reaching Category 4 or Category 5 status increased by nearly 100 percent.” [1]

All this is “news” to be sure…and yet, in another sense, it is as old as the hills. Writing nearly two millennia ago, the Apostle Paul could also speak in Romans chapter 8 about the earth in the balance, the whole creation groaning…..groaning, mind you--the natural world, giving voice to the gnawing suspicion that things are not as they were meant to be.

How ancient and yet how contemporary our Bible is! Elizabeth Kolbert, meet the Apostle Paul, and tune in to each other as you listen to the groaning of this tired, battered, threatened world.

Our two witnesses—Kolbert and St. Paul--agree on the deep connection, the causal link between human behavior (or should we say misbehavior) and the cosmic groaning. The groaning has a source, and it is us, you and me…..through our actions and our inactions, we have all contributed to the “futility” that plays itself out in a natural world run amok.

And yet….and yet….in the midst of their agreement, Kolbert and St. Paul differ on what this planetary mess means and how we should regard it.

For Paul the groaning is of another order, it represents a different reality than Kolbert names so compellingly.

For the groaning that St. Paul speaks of is not the groaning of despair or defeat or death. No, the groaning here in Romans 8 is of a living being, preparing to give birth, the old creation laboring to bring forth a new creation.

What appears for all the world to be the groaning and “last gasping” of a dying world is, in the mercy of almighty God, the panting and pining of a mother in travail, laboring to give birth to the new creation. In Paul’s view, the groaning feeds our hope and this hope overcomes our anxieties and grants us the patience to believe that God in Jesus Christ the crucified and risen one is still at work here—in, with and under all the “stuff” that Kolbert unearths for us.

Lest you think, even for a second, though, that I’m going to pull a theological rabbit out of a hat and say: “don’t worry, be happy, God’s gonna fix up what seems unfixable to us”….

….lest I even seem to be heading in that direction, I hasten to add that while the hope God engenders in us is an unshakably gracious hope, it does not lull us into slumber. God’s answer to climate change and everything else that causes this creation to groan involves us—our will, our decisions, our passions, our politics, our gifts, our studies, our prayers and our hard work—all of it blended together in the mystery of God’s redemptive purposes.

The hope that we have in Jesus Christ, the agent of God’s new creation—this hope does not anesthetize us. Rather, it galvanizes us.

Bishop N.T. Wright of the Anglican diocese of Durham, in his splendid book Surprised by Hope, puts it this way: “People who believe in the resurrection, in God making a whole new world in which everything will be set right at last, are unstoppably motivated to work for that new world in the present….God has brought his future, his putting-the-world-to-rights future, into the present in Jesus of Nazareth, and God wants that future to be implicated more and more in the present.”[2]

In the name of Jesus.
Amen.